Spinocerebellar ataxia type 7 (SCA7) is a genetic disorder caused by mutations in the ATAXIN-7 gene. SCA7 is characterized by impairments in coordination, balance, and speech and by retinal degeneration. Retinal degeneration results eventually in complete blindness.


To explain how this technique works, I start with our genes. Our genes are made out of DNA, a chemical code that includes the information that allows our cells to function. This information is used to make proteins, the molecular machines and building blocks that are crucial for cells to work. Antisense oligonucleotides intervene at a critical intermediate stage between DNA and proteins – where the DNA is converted into a molecule called messenger RNA (or mRNA for short). mRNA is very similar to DNA, but much less stable, and chemically very slightly different. It acts as the template for making proteins. If you can get rid of it, the proteins don’t get made. Antisense oligonucleotides are synthetic fragments of DNA that can bind to mRNAs, causing them to be cut into pieces. 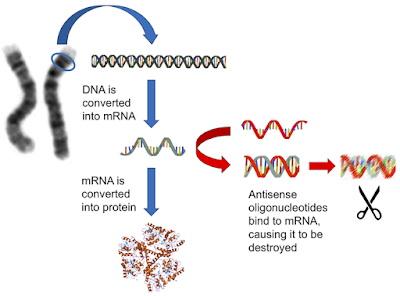 Intravitreal injection (injection in the eye) of ASOs specifically targeting the mutated Ataxin-7 reduced protein expression in the retina and ameliorated pathology and vision loss in a SCA7 mouse model.


The results suggest that ASOs targeting ATAXIN-7 might be effective in treating retinal degeneration in patients with SCA7.