The team of Dineke Verbeek, UMCG (University Medical Center Groningen), discovered in a previous study that SCA23 is caused by mutations in a keyplayer of the opioid system. The opioid system controls pain, reward and addictive behaviors.


In a subsequent study, the team looked at the effect of the SCA23 mutations  that were located in dynorphin, one of the major opioid peptides. Dynorphin is produced in many different parts of the brain. Dynorphin acts as a chemical messenger. It enables the transmission of signals from one nerve cell to another nerve cell. 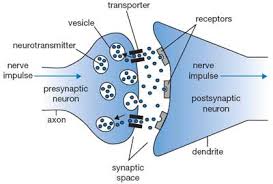 
Dynorphin is released from the nerve cell and will be received by opioid receptors on the target nerve cell. Also opiates - the painkiller morphine is best known - can bind to these receptors.


The 3D-structure of dynorphin was changed by the mutation in such a way that dynorphin was not able to bind to the specific opioid receptor. The result is that connecting nerve cells cannot be properly activated anymore.


The findings suggest that reduced opioid signaling is harmful to nerve cells and that this is a contributing cause of the degeneration of Purkinje cells in the cerebellum of SCA23 patients.


Why Purkinje cells are so sensitive to changes in activation of the opioid system is not yet known. Maybe low dose painkillers will have a protective effect on SCA23. This should be investigated in future studies.